Many micro greens and greens are Asian in origin and can be used to give an Asian flair to many types of dishes. These Asian themed specialty products can also blend in well with American dishes, providing new and exciting flavors.

With more than 350 products, Fresh Origins has all of the Asian micro greens you will need to add zest to your dishes.

Here is just a few that are available. There is Micro Chinese Cabbage, which can be used to spice up lettuce and spinach salads; and Micro Thai Basil which has an unusual licorice flavor that also blends well with Asian or fusion cuisine.

Micro Red Shiso has dark red, uniquely flavored leaves, and is a great topping for sushi rolls and nigiri.

Micro Tatsoi, first cultivated in Japan, is popular for use in both European and Asian foods. It is dark green in color and a member of the broccoli family. It goes well with salads and sandwiches. It has a taste that echoes that of mustard greens.

Another Asian microgreen is the Daikon Radish, which comes in purple or green. The word Daikon means “large root” in Japanese, and the vegetable has a crisp texture and a spicy flavor and can really perk up salads or side dishes.

Mitsuba, Japanese parsley is another microgreen that is a common in Asian dishes. It has an earthy parsley-like flavor and can make a great addition to salads, and stir fry. Nice for floating on miso soup!

Micro Cilantro is a common element in Thai cooking and can be used in salads, chutneys and salsas. It has a very fresh and strong flavor for such a small herb! 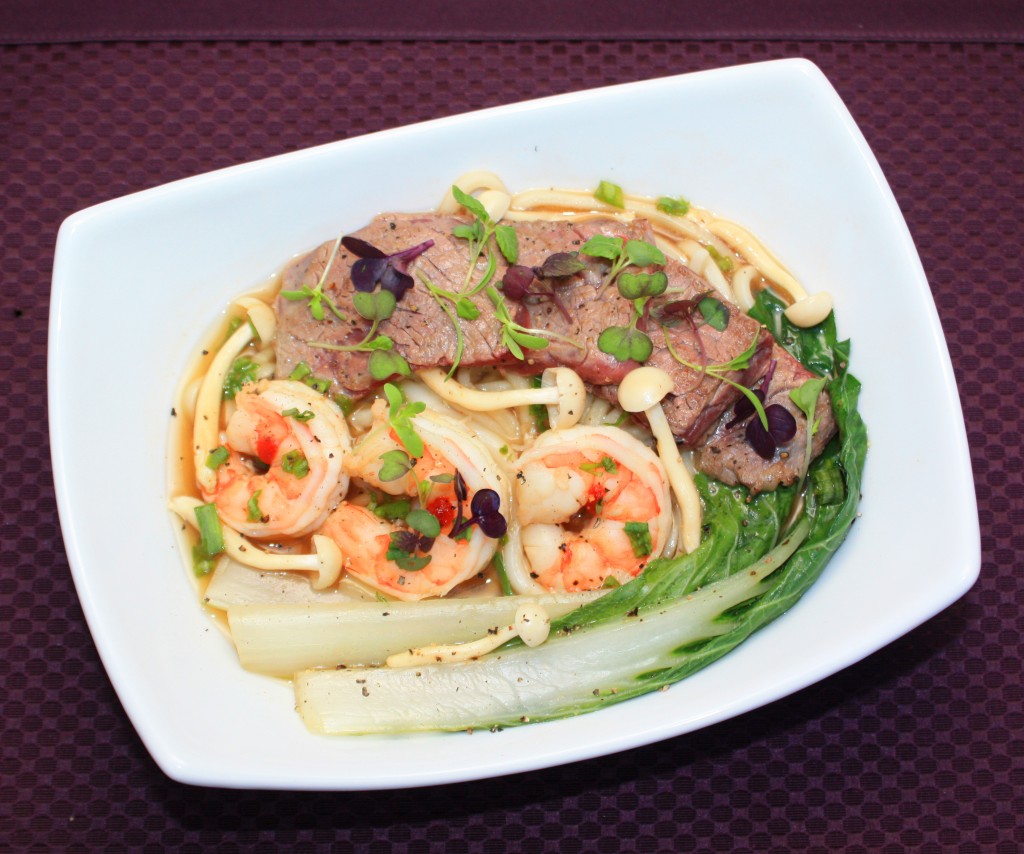 Other examples of Asian-style garnishes! 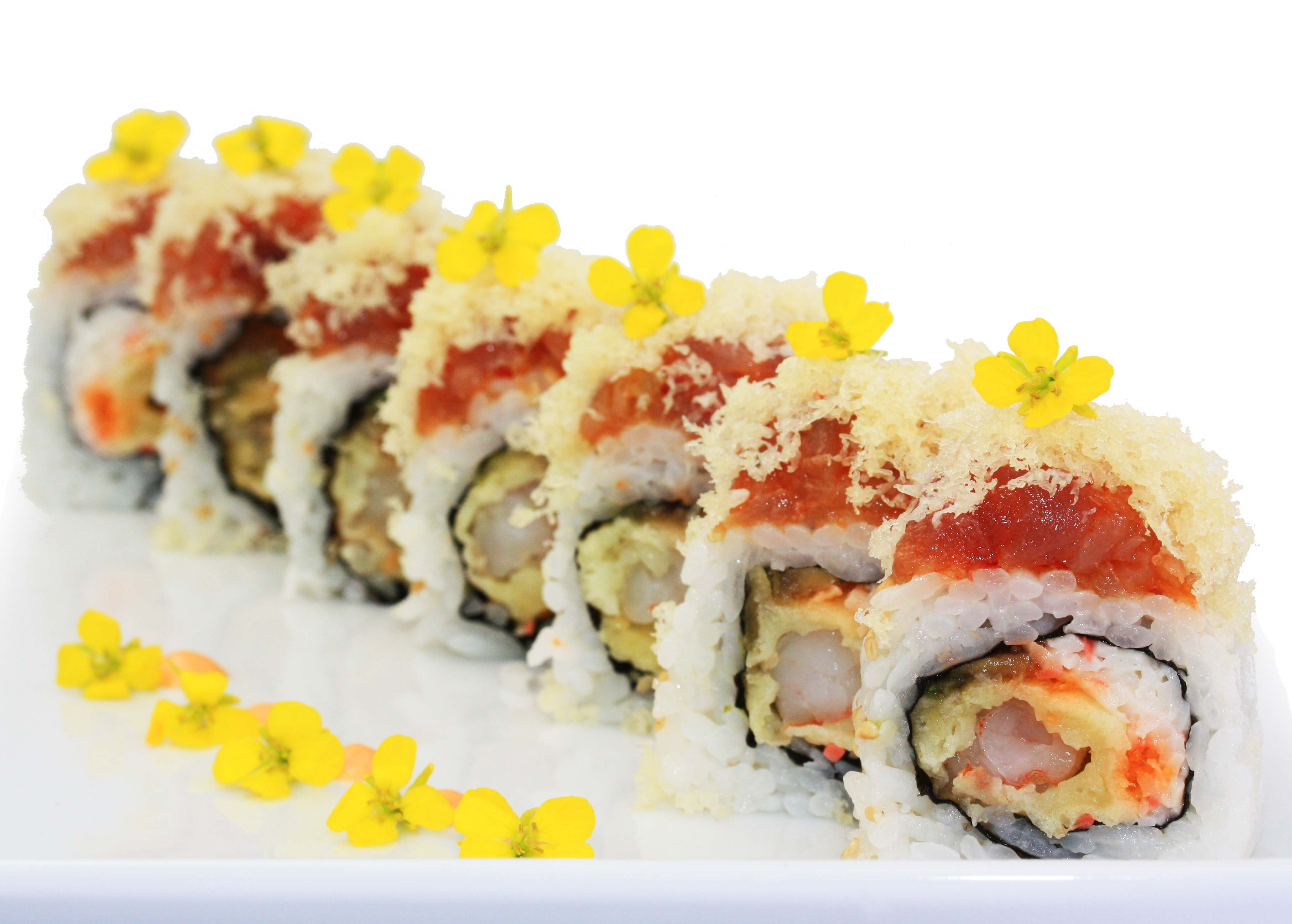 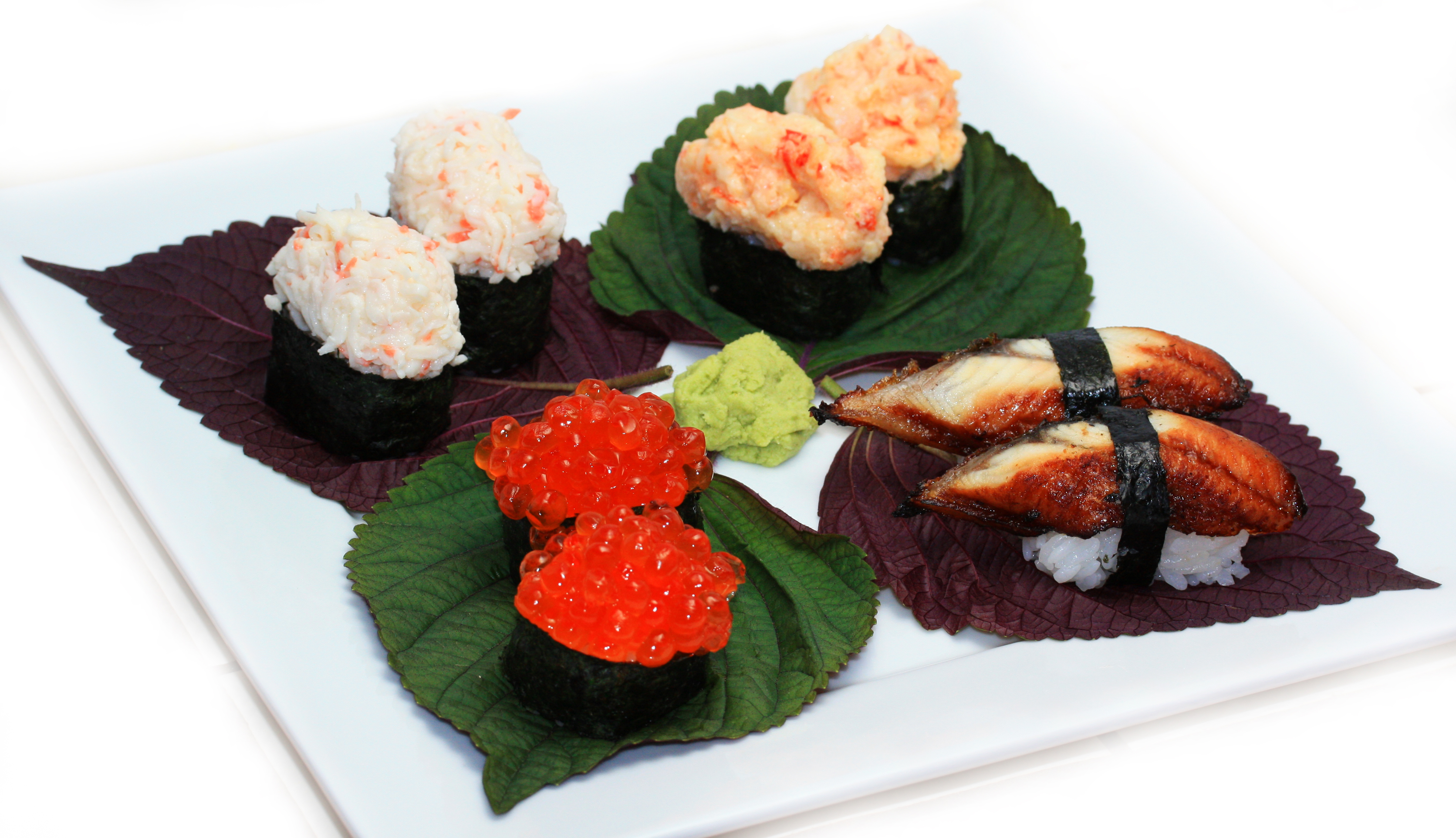 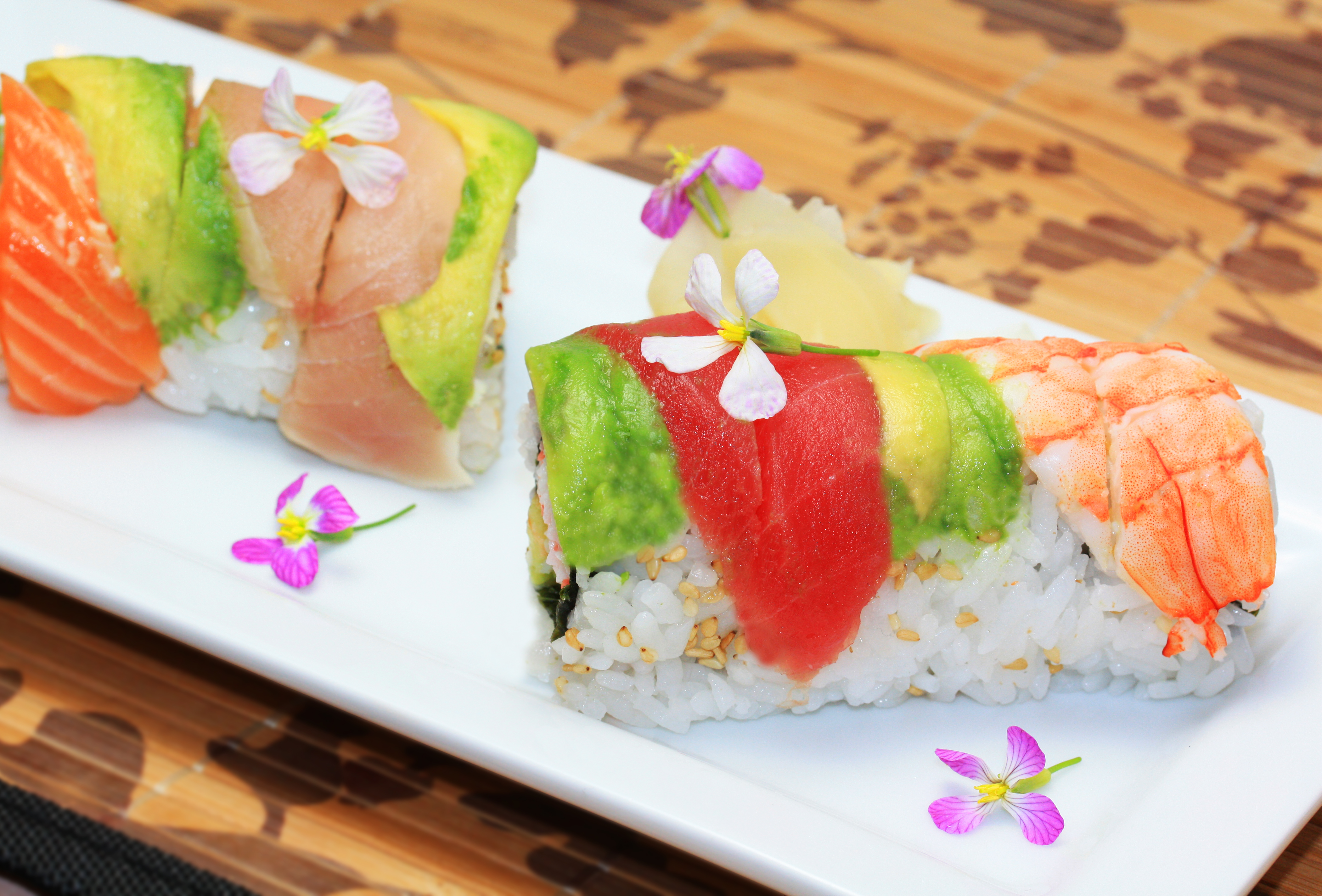 Fresh Origins was proud to be a sponsor of the First Annual Los Angeles Food & Wine Festival in October 2011! The creators and producers of the premier epicurean lifestyle event on the West Coast proudly presented the next great culinary and live entertainment playground, where celebrity met celebrity chef. There were 58 Different events and 141 Chefs that participated! Some of the nation’s Top Chefs used our Microgreens & Edible Flowers on their dishes! Some of the Chefs included: Bradley Ogden, Daniel Boulud, Sam Choy, Roy Yamaguchi, Elizabeth Falkner, Johnny Iuzzini, Wolfgang Puck, Michael Mina, & Masaharu Morimoto.

Chef Masaharu Morimoto—known to millions as the star of Iron Chefand Iron Chef America—has garnered critical and popular acclaim for his seamless integration of Western andJapanese ingredients.  He has effectively created a signature cuisine that has gained worldwide appeal and positioned him as one of the foremost chefs today.  Morimoto is executive chef at Morimoto Philadelphia,Morimoto New York, and Wasabi by Morimoto.  In July 2010, chef Morimoto opened his first West Coast restaurant, Morimoto Napa, in downtown Napa’s new Riverfront development, followed by the fall 2010 debut of Morimoto Waikiki in Waikiki EDITION, the new luxury lifestyle hotel developed by Ian Schrager and Marriott.

Sam Choy’s colorful personality and welcoming smile have drawn customers to his multiple restaurants over the last 30 years, but it is his award-winning cooking that keeps them coming back.For the last 16 years, Sam has appeared on his weekly cooking show, Sam Choy’s Kitchen, on the Hawaiian Island’s local NBC affiliate. He has authored 16 cookbooks, has a frozen food line with a major international distributor, has his personal recipe sauces and dressings available in national food store chains and has designed first and business class menus for American’s Airlines International Flights. Choy is a four-time nominee for the James Beard Best Pacific Regional chef award, winning in 2004. He is often credited as the “Godfather of Poke” and the Culinary Ambassador of the Big Island. Sam also enjoys catering for private events and donates his time to support multiple charities. 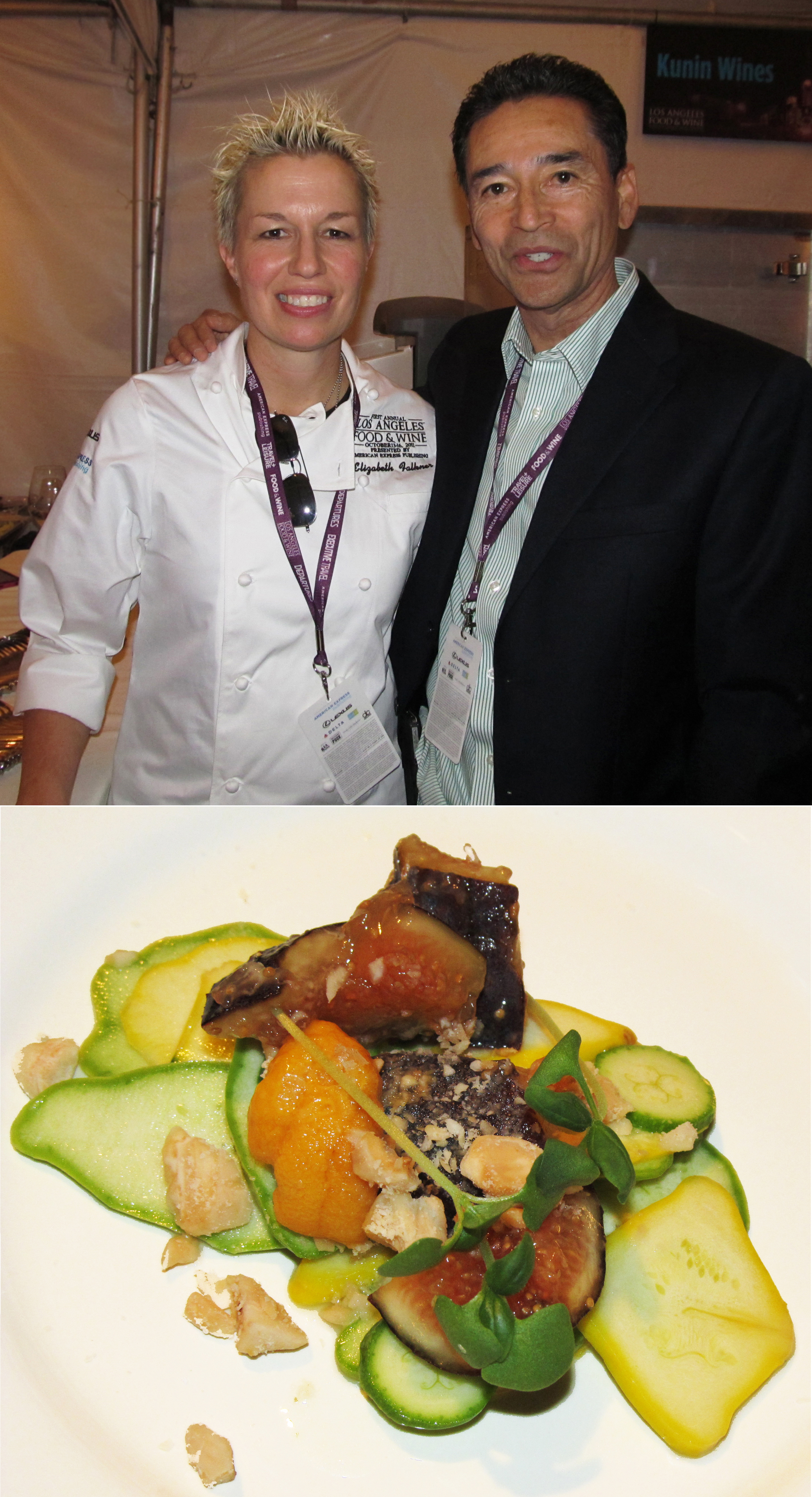 With her spiky platinum hair and unstoppable creativity, Elizabeth Falkner has become one of the most recognizable faces of the Bay Area culinary world on Bravo, Food Network and beyond. She has been a frequent contestant, judge, and guest on Top Chef Masters, Top Chef, Iron Chef America, Sugar Rush, Tyler’s Ultimate with Tyler Florence, Rachael Ray’s $40 a Day, Martha Stewart Living, and more.

Falkner is the owner and Chef of two Michelin recommended restaurants in San Francisco. Citizen Cake patisserie, restaurant and bar in Pacific Heights, along with the popular SOMA restaurant bar and lounge Orson. Once known as the go-to for all things pastry, Elizabeth’s expertise is now widely acknowledged to have bridged the gap between sweet and savory.

Johnny Iuzzini, Executive Pastry Chef at award winning Restaurant Jean-Georges and café Nougatine in New York City, hails from the Catskills in upstate New York. A graduate of the Culinary Institute of America with twenty years of kitchen experience since the age of 15, he boasts a heavy list of experience at highly lauded dining locations such as The River Café in Brooklyn, NY, Daniel, Payard and Café Boulud in New York City.  His enrichment continued during a journey around the world in 1998 as well as to study pastry at some of the finest patisseries in France including LaDuree under Pierre Herme.

Chef Iuzzini was deemed “Outstanding Pastry Chef of the Year” by the James Beard Foundation in 2006, followed by accolades such as “10 Most Influential Pastry Chefs in America” by Forbes Magazine, “Best New Pastry Chef” by New York Magazine, and named one of the “Top Ten Pastry Chefs in America” two years in a row by Pastry Arts and Design Magazine. Iuzzini is the head judge of Bravo’s new culinary competition series “Top Chef Just Desserts” and the author of Dessert Fourplay: Sweet Quartets From A Four-Star Pastry Chef.

Based on childhood memories of the feelings and flavors of Hawaii, Roy invented what he refers to as “Hawaiian Fusion® Cuisine” — a tempting combination of exotic flavors and spices mixed with the freshest of local ingredients, always with an emphasis on seafood. Thusly inspired, he graduated from the Culinary Institute of America in New York at the age of 19, where, after several years of intense training, he became a Master Chef.

Yamaguchi is now regarded as a pioneer who mastered a distinctive style, which brought his cooking to the forefront of contemporary gastronomy. As testimony to his success, there are now 31 Roy’s, including 23 in the Continental U.S., 6 in Hawaii, 1 in Japan and 1 in Guam.

Honored early in his career with the prestigious James Beard “Best Pacific Northwest Chef” Award, Yamaguchi has hosted six seasons of the PBS-TV show, Hawaii Cooks with Roy Yamaguchi seen on more than 300 stations in all 50 states, as well as in over 60 countries. Equally notable, he was a featured chef on the acclaimed TV Food Network program, My Country, My Kitchen which takes viewers back to his roots in Japan.

The KINOME LEAF🌿...what an adventurous taste!⁠
⁠
We were grateful to introduce it to so many festival-goers this year at #SDBAYFEST. These peeps enjoyed it floating on top of beer, cocktails, and straight-up raw as a palette cleanser.⁠
⁠
Most were not prepared for the tingling sensation and fresh floral notes. All were amazed and delighted!⁠
⁠
🌿🌿🌿⁠
⁠
#freshoriginsmicrogreens #kinomeleaf #sdbayfest ... See MoreSee Less

Start your day the right way with bagel, lox and c

How petite is our Micro Nasturtium Leaf, you ask?

We are feeling the savory 😋 vibes of this dish

The holidays put the heat on desserts - seems ever

This past summer at NightClub & Bar, Fresh Origins

We're about to imbibe on these Mocktails by @bradl